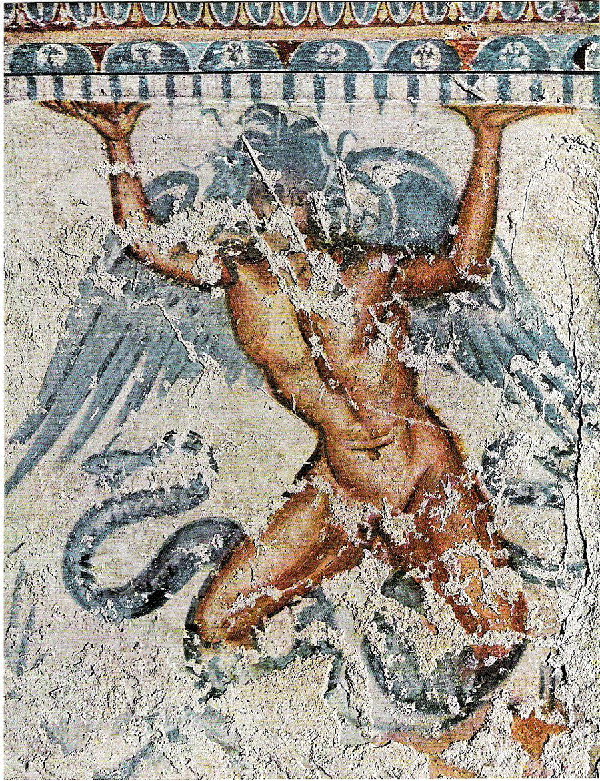 Etruscan religion comprises a set of stories, beliefs, and religious practices of the Etruscan civilization, originating in the 7th century BC from the preceding Iron Age Villanovan culture, heavily influenced by the mythology of ancient Greece and Phoenicia, and sharing similarities with concurrent Roman mythology and religion. As the Etruscan civilization was assimilated into the Roman Republic in the 4th century BC, the Etruscan religion and mythology were partially incorporated into ancient Roman culture, following the Roman tendency to absorb some of the local gods and customs of conquered lands.

Greek traders brought their religion and hero figures with them to the coastal areas of the central Mediterranean. Odysseus, Menelaus and Diomedes from the Homeric tradition were recast in tales of the distant past that had them roaming the lands West of Greece. In Greek tradition, Heracles wandered these western areas, doing away with monsters and brigands, and bringing civilization to the inhabitants. Legends of his prowess with women became the source of tales about his many offspring conceived with prominent local women, though his role as a wanderer meant that Heracles moved on after securing the locations chosen to be settled by his followers, rather than fulfilling a typical founder role. Over time, Odysseus also assumed a similar role for the Etruscans as the heroic leader who led the Etruscans to settle the lands they inhabited. Claims that the sons of Odysseus had once ruled over the Etruscan people date to at least the mid-6th century BC. Lycophron and Theopompus link Odysseus (known locally as ''Nanos'') to Cortona. In Italy during this era it could give non-Greek ethnic groups an advantage over rival ethnic groups to link their origins to a Greek hero figure. These legendary heroic figures became instrumental in establishing the legitimacy of Greek claims to the newly settled lands, depicting the Greek presence there as reaching back into antiquity.

After the Etruscan defeat in the Roman–Etruscan Wars, the remaining Etruscan culture began to be assimilated into the Roman. The Roman Senate adopted key elements of the Etruscan religion, which were perpetuated by haruspices and noble Roman families who claimed Etruscan descent, long after the general population had forgotten the language. In the last years of the Roman Republic the religion began to fall out of favor and was satirized by such notable public figures as Marcus Tullius Cicero. The Julio-Claudians, especially Claudius, who claimed a remote Etruscan descent, maintained a knowledge of the language and religion for a short time longer, but this practice soon ceased. A number of canonical works in the Etruscan language survived until the middle of the first millennium AD, but were destroyed by the ravages of time, decree of the Roman Senate, and by fire.

The mythology is evidenced by a number of sources in different media, for example representations on large numbers of pottery, inscriptions and engraved scenes on the Praenestine ''cistae'' (ornate boxes; see under Etruscan language) and on ''specula'' (ornate hand mirrors). Currently some two dozen fascicles of the ''Corpus Speculorum Etruscorum'' have been published. Specifically Etruscan mythological and cult figures appear in the ''Lexicon Iconographicum Mythologiae Classicae''. Etruscan inscriptions have recently been given a more authoritative presentation by Helmut Rix, ''Etruskische Texte''.

The Etruscans believed their religion had been revealed to them by seers, the two main ones being Tages, a childlike figure born from tilled land who was immediately gifted with prescience, and Vegoia, a female figure. The Etruscans believed in intimate contact with divinity. They did nothing without proper consultation with the gods and signs from them. These practices were taken over in total by the Romans.

The Etruscan scriptures were a corpus of texts termed the ''Etrusca Disciplina''. This name appears in Valerius Maximus, and Marcus Tullius Cicero refers to a ''disciplina'' in his writings on the subject. Massimo Pallottino summarizes the known (but non-extant) scriptures as the ''Libri Haruspicini'', containing the theory and rules of divination from animal entrails; the ''Libri Fulgurales'', describing divination from lightning strikes; and the ''Libri Rituales''. The last was composed of the ''Libri Fatales'', detailing the religiously correct methods of founding cities and shrines, draining fields, formulating laws and ordinances, measuring space and dividing time; the ''Libri Acherontici'', dealing with the hereafter; and the ''Libri Ostentaria'', containing rules for interpreting prodigies. The revelations of the prophet Tages were given in the ''Libri Tagetici'', which included the ''Libri Haruspicini'' and the ''Acherontici'', and those of the prophetess Vegoia in the ''Libri Vegoici'', which included the ''Libri Fulgurales'' and part of the ''Libri Rituales''. These works did not present prophecies or scriptures in the ordinary sense: the ''Etrusca Disciplina'' foretold nothing itself. The Etruscans appear to have had no systematic ethics or religion and no great visions. Instead they concentrated on the problem of the will of the gods: questioning why, if the gods created the universe and humanity and have a will and a plan for everyone and everything in it, they did not devise a system for communicating that will in a clear manner. The Etruscans accepted the inscrutability of their gods' wills. They did not attempt to rationalize or explain divine actions or formulate any doctrines of the gods' intentions. As answer to the problem of ascertaining the divine will, they developed an elaborate system of divination; that is, they believed the gods offer a perpetual stream of signs in the phenomena of daily life, which if read rightly can direct humanity's affairs. These revelations may not be otherwise understandable and may not be pleasant or easy, but are perilous to doubt. The Etrusca Disciplina therefore was mainly a set of rules for the conduct of all sorts of divination; Pallottino calls it a religious and political "constitution": it does not dictate what laws shall be made or how humans are to behave, but rather elaborates rules for asking the gods these questions and receiving answers. Cicero said

For a hasty acceptance of an erroneous opinion is discreditable in any case, and especially so in an inquiry as to how much weight should be given to auspices, to sacred rites, and to religious observances; for we run the risk of committing a crime against the gods if we disregard them, or of becoming involved in old women's superstition if we approve them.

He then quipped, regarding divination from the singing of frogs:

Who could suppose that frogs had this foresight? And yet they do have by nature some faculty of premonition, clear enough of itself, but too dark for human comprehension.

Divinatory inquiries according to discipline were conducted by priests whom the Romans called haruspices or sacerdotes; Tarquinii had a college of 60 of them.