Royal Air Force Cosford or RAF Cosford (formerly DCAE Cosford) is a Royal Air Force station in Cosford, Shropshire, just to the northwest of Wolverhampton and next to Albrighton.

RAF Cosford opened in 1938 as a joint aircraft maintenance, storage and technical training unit. It was originally intended to be opened as RAF Donington (the parish in which it is located) but to avoid confusion with the nearby army camp at Donnington it was named after Cosford Grange House which was located at the south western edge of the airfield. It has remained mainly a training unit to this day. The ''Fulton'' barrack block was built just before the Second World War as the largest single building barrack block in the UK. The block was named after Captain Fulton (an early Air Force pioneer) and paid for by his widow, Lady Fulton. It is a listed building and is now used for technical training. No 2 School of Technical Training was formed in 1938 and during the Second World War it trained 69,420. airmen in engine, airframe and armament trades. No 2 School of Technical Training was subsumed into the No 1 School of Technical Training when it moved to Cosford from RAF Halton in Buckinghamshire. In the Second World War No 12 Ferry Pool of the Air Transport Auxiliary (ATA) was formed at Cosford. This unit delivered Spitfires from the base and returning with bombers or fighters for No 9 Maintenance Unit. Ferry flights were often flown by women pilots. Amy Johnson came to Cosford on more than one occasion. In 1940 after the Fall of France a depôt was established at RAF Cosford for Free Czechoslovak personnel joining the Royal Air Force Volunteer Reserve. The airfield was originally a grass strip. In 1940–41 there was a bad winter in which landing heavy aircraft such as Vickers Wellingtons and Avro Ansons turned the strip into a mudbath. Thereafter a paved runway was built that was long and wide. A substantial Princess Mary's Royal Air Force Nursing Service hospital was established at RAF Cosford, the most westerly such RAF hospital in the UK. It consisted of wooden spurred huts. It was the main centre for repatriated prisoners of war, processing more than 13,000 by 1948. Many from the Far East had to remain for long term-treatment. The hospital was open to the general public as well as servicemen and women. It was closed on 31 December 1977 and demolished in 1980. For the three summers between 1978 and 1980 the empty hospital formed the venue for annual training camps for the Royal Observer Corps, with wards and theatres converted into barrack accommodation and training rooms. The extensive sports facilities at Cosford, located around a banked indoor running track, became well known nationally through televised annual indoor championships that featured top athletes from all over the world.

Following the UK Government's 2001 Defence Training Review (DTR), the Ministry of Defence proposed handing over armed forces skills training to a private sector bidder for a 25-year term, and it was announced on 17 January 2007 that the Metrix consortium had been awarded Preferred Bidder status for Package 1 of this programme. As a consequence, it was anticipated that all technical training would move from Cosford to Metrix's main campus to be built on the RAF St Athan site over a 5-year period from 2008. This in turn was deferred with no anticipated move from Cosford to St Athan for DCAE and No1 RS staff and trainees before 2014–15 at the earliest. For those other training schools, headquarters and units at present at Cosford, decisions were yet to be made about their future location. On 31 January 2008, the Government announced that when 1 Signal Brigade and 102 Logistics Brigade withdraw from Germany they would move to Cosford. It was also noted that Metrix proposed to establish a Learning Centre and Design facility at the Cosford site. In December 2012 the Government announced training facilities from RAF Cosford would be moved by end of 2015 to the site of the former RAF Station at Lyneham as part of the projected tri-service Defence College of Technical Training, in common with Army and Royal Navy training facilities that would also be consolidated on the site. However, on 15 September 2015, the Defence Secretary, Michael Fallon announced in Parliament by written statement that the Lyneham site would only be used by the army and that Cosford would not be closed and remain as a separate RAF training establishment which would be given extra work, with a fourth training school (No 4 School of Technical Training) moving to Cosford from MoD St Athan in south Wales. The announcement was described in local media as "a Government U-turn". No. 633 Volunteer Gliding Squadron, which operated the Grob Vigilant T1, was disbanded in November 2016. 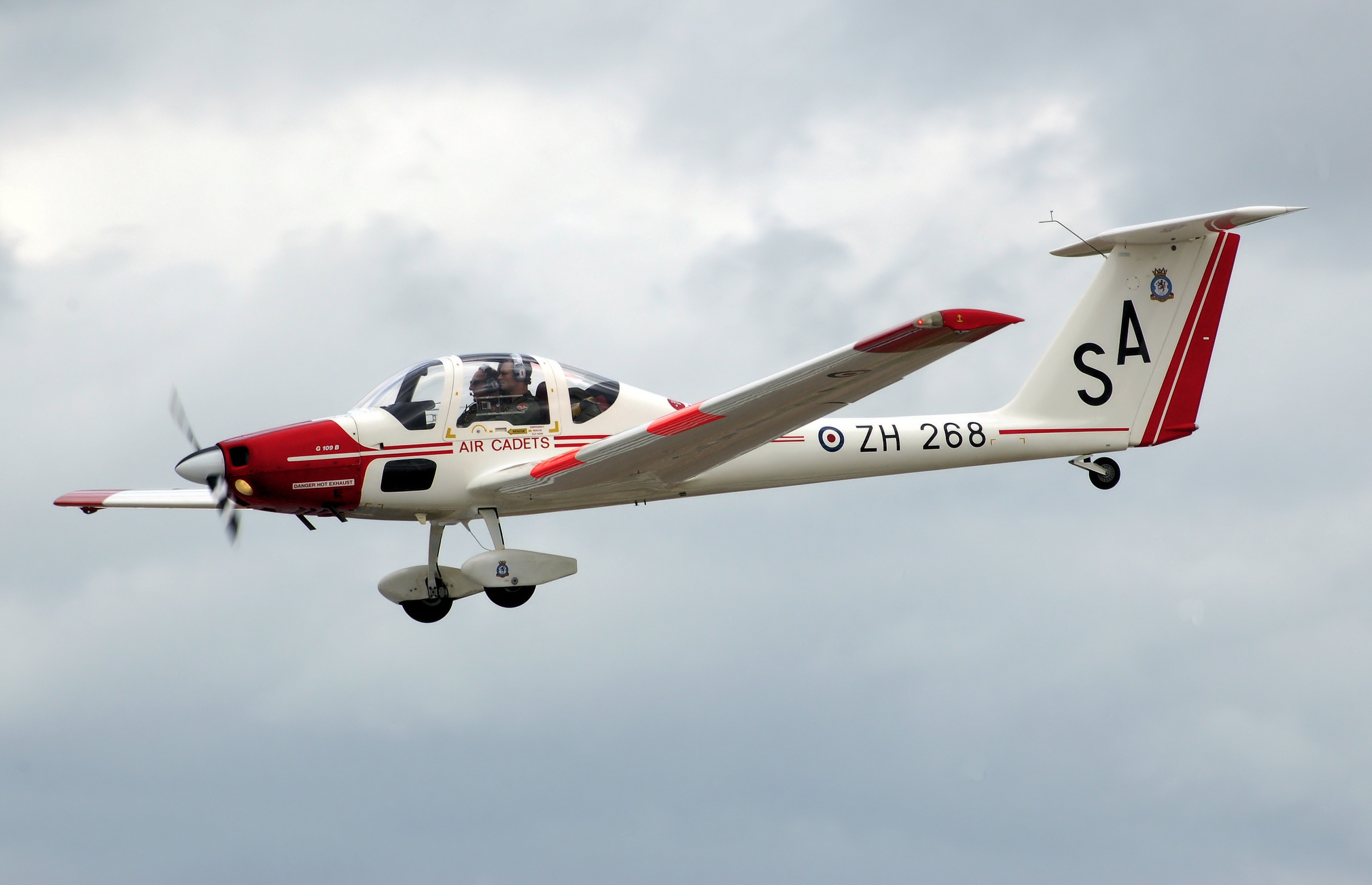 Flying and notable non-flying units based at RAF Cosford.

RAF Cosford's airfield site is home to one of the Midlands Air Ambulance helicopters. The first aircraft arrived on site in October 1991 with two other platforms based elsewhere in the region. Cosford remains the operations hub for the service.

There is also the Aerospace Museum at the site, which is a branch of the Royal Air Force Museum. Amongst the large collection of military aircraft is a unique collection of research and development aircraft, including one of two existing examples of the TSR2, a multi-role combat aircraft, controversially scrapped by the Wilson Government and still a point of discussion within the RAF. There are also collections of missiles and airliners. The Cold War Exhibition opened on 7 February 2007 by former prime minister Baroness Thatcher and HRH Princess Anne. Exhibits include the only collection of three V bombers (Valiant, Victor and Vulcan) in the same place in the world.

The Cosford Air Show is the only Royal Air Force air show that is officially supported by the Royal Air Force in Britain after the closure of RAF Leuchars and the runway resurfacing at RAF Waddington meant the air shows at those respective bases were stopped. The event is held on the airfield of RAF Cosford and regularly hosts flying and static displays which attract more than 50,000 people and is generally held on the second Sunday in June of each year. An air show at Cosford was first proposed in 1978 and continues to the present day. The event was cancelled in 2003 due to an inability to secure enough serving military aircraft. The war in Iraq had meant that most aircraft were deployed operationally and the RAF could not commit to the air show. The runway at Cosford is only in length so most flying displays will either arrive on the day or stay overnight at RAF Shawbury which has a longer airfield. The air show varies from year to year, but mostly consists of flying and static displays, fun fair rides, concession stands, food outlets, trade stands and also serves to raise money for charity whilst also being seen by the Royal Air Force as a recruitment event as part of its wider public engagement role. Recent years have seen the promotion of STEM events with guests such as Carol Vorderman highlighting the STEM approach. All profits raised at the event go to supporting officially recognized charities by the air show committee with the event in 2016 raising £115,000 for RAF charities. In 2013, Prince Harry, as part of No. 662 Squadron of the Army Air Corps, took part in the Apache helicopter demonstration at the air show. In 2018 Cosford hosted the only official RAF airshow dedicated to the centenary of the Royal Air Force. Its flying line up was displayed in chronological order starting with aircraft used in 1918 right through to current day aircraft used by the RAF. It also featured several international displays including a Polish Air Force Mig 29, a French Air Force Rafale, a Royal New Zealand Air Force Boeing 757 and a Belgian Air Force A109 The show also boasted a massive static display detailing the RAF through the years including a F4 Phantom, multiple Tornados and Harrier aircraft and as well as Spitfires, Hurricanes and a Blackburn B-2 Because of the restricted access by vehicle, all roads into the Cosford site become one-way with traffic flow inwards on the morning of the event and outwards on the afternoon and evening of the event. Sometimes the M54 suffers tailbacks and queuing and the slip and access roads have to be closed due to the site reaching its 18,000 vehicle parking limit. The local train operator, Arriva Trains Wales, have a deal whereby a combined rail and air show ticket offers a discount and allows users direct access on foot to the air show event. Cosford railway station is next to the main crash gate access point onto the eastern edge of the airfield. There is an aspiration to make the air show run over two days as a perceived rival to the Royal International Air Tattoo which attracts 150,000 spectators.

The RAF Cosford Badge is adorned with an oak tree and the motto is ''Seul Le Premier Pas Coute'', which translates as ''Only the Beginning is Difficult''. The oak tree is symbolic of the nearby oak at Boscobel which King Charles II took refuge in after the Battle of Worcester. The idea of this association is that of being from little acorns, great oak trees grow (from trainees the airmen of the future grow). This badge was also shared with the No. 2 School of Technical Training until 1986, when the School adopted a new badge with the iron bridge of Ironbridge on it and the motto of ''Scientia Pons Perpetuus Est'' which translates as ''Knowledge is a Lasting Bridge.''

The station's Fulton Block, a combined barracks block, institute and mess, was grade II listed in December 2005. Built between 1938 and 1939 as permanent accommodation for 1,000 personnel, it was designed in the Moderne architectural style by J H Binge, of the Air Ministry's Directorate of Works and Buildings.

The following are the Station Commanders for RAF Cosford, DCAE and DSAE Cosford. † Died in office May 2011.

On 4 March 2000, Julian Paszki of Wrekin Gliding Club was killed when his Ex-RAF Chipmunk aircraft crashed. The aircraft was seen to veer left and dive into the ground despite being only in the air at the time. Mr Paszki was pulled alive from the wreckage but died at Selly Oak Hospital later that same day.

RAF Cosford is the location for James May's ''Toy Stories'', where the BBC's Top Gear presenter constructed a 1:1 scale Supermarine Spitfire in the style of an Airfix kit with the help of students from the Thomas Telford school and Air Cadets from the ATC.