Claudius ( ; Tiberius Claudius Caesar Augustus Germanicus; 1 August 10 BC – 13 October AD 54) was Roman emperor from AD 41 to 54. Born to Nero Claudius Drusus and Antonia Minor at Lugdunum in Roman Gaul, where his father was stationed as a military legate, he was the first Roman emperor to be born outside Italy. Nonetheless, Claudius was an Italic of Sabine origins and a member of the Julio-Claudian dynasty. Because he was afflicted with a limp and slight deafness due to sickness at a young age, his family ostracized him and excluded him from public office until his consulship, shared with his nephew Caligula in 37. Claudius's infirmity probably saved him from the fate of many other nobles during the purges during the reigns of Tiberius and Caligula as potential enemies did not see him as a serious threat. His survival led to him being declared emperor by the Praetorian Guard after Caligula's assassination, at which point he was the last adult male of his family. Despite his lack of experience, Claudius proved to be an able and efficient administrator. He expanded the imperial bureaucracy to include freedmen, and helped to restore the empire's finances after the excess of Caligula's reign. He was also an ambitious builder, constructing many new roads, aqueducts, and canals across the Empire. During his reign the Empire started its successful conquest of Britain. Having a personal interest in law, he presided at public trials, and issued up to twenty edicts a day. He was seen as vulnerable throughout his reign, particularly by elements of the nobility. Claudius was constantly forced to shore up his position, which resulted in the deaths of many senators. Those events damaged his reputation among the ancient writers, though more recent historians have revised that opinion. Many authors contend that he was murdered by his own wife, Agrippina the Younger. After his death at the age of 63, Nero, his grand-nephew and legally adopted step-son, succeeded him as emperor.

Claudius was born on 1 August 10 BC at Lugdunum (modern Lyon, France). He had two older siblings, Germanicus and Livilla. His mother, Antonia Minor, may have had two other children who died young. Claudius's maternal grandparents were Mark Antony and Octavia Minor, Augustus's sister, and he was therefore the great-great grandnephew of Gaius Julius Caesar. His paternal grandparents were Livia, Augustus' third wife, and Tiberius Claudius Nero. During his reign, Claudius revived the rumor that his father Nero Claudius Drusus was actually the illegitimate son of Augustus, to give the appearance that Augustus was Claudius' paternal grandfather. In 9 BC, Claudius's father Drusus unexpectedly died on campaign in Germania, possibly from illness. He was then left to be raised by his mother, who never remarried. When his disability became evident, the relationship with his family turned sour. Antonia referred to him as a monster, and used him as a standard for stupidity. She seems to have passed her son off to his grandmother Livia for a number of years. Livia was a little kinder, but nevertheless often sent Claudius short, angry letters of reproof. He was put under the care of a "former mule-driver" to keep him disciplined, under the logic that his condition was due to laziness and a lack of willpower. However, by the time he reached his teenage years, his symptoms apparently waned and his family began to take some notice of his scholarly interests. In AD 7, Livy was hired to tutor Claudius in history, with the assistance of Sulpicius Flavus. He spent a lot of his time with the latter, as well as the philosopher Athenodorus. Augustus, according to a letter, was surprised at the clarity of Claudius's oratory. Expectations about his future began to increase.

Claudius's work as a budding historian damaged his prospects for advancement in public life. According to Vincent Scramuzza and others, he began work on a history of the Civil Wars that was either too truthful or too critical of Octavian, then reigning as Augustus Caesar. In either case, it was far too early for such an account, and may have only served to remind Augustus that Claudius was Antony's descendant. His mother and grandmother quickly put a stop to it, and this may have convinced them that Claudius was not fit for public office, since he could not be trusted to toe the existing party line. When Claudius returned to the narrative later in life, he skipped over the wars of the Second Triumvirate altogether. But the damage was done, and his family pushed him into the background. When the Arch of Pavia was erected to honor the Imperial clan in 8 AD, Claudius's name (now Tiberius Claudius Nero Germanicus after his elevation to paterfamilias of the Claudii Nerones on the adoption of his brother) was inscribed on the edge—past the deceased princes, Gaius and Lucius, and Germanicus's children. There is some speculation that the inscription was added by Claudius himself decades later, and that he originally did not appear at all. When Augustus died in AD 14, Claudius—then aged 23—appealed to his uncle Tiberius to allow him to begin the ''cursus honorum''. Tiberius, the new Emperor, responded by granting Claudius consular ornaments. Claudius requested office once more and was snubbed. Since the new Emperor was no more generous than the old, Claudius gave up hope of public office and retired to a scholarly, private life. Despite the disdain of the Imperial family, it seems that from very early on the general public respected Claudius. At Augustus's death, the ''equites'', or knights, chose Claudius to head their delegation. When his house burned down, the Senate demanded it be rebuilt at public expense. They also requested that Claudius be allowed to debate in the Senate. Tiberius turned down both motions, but the sentiment remained. During the period immediately after the death of Tiberius's son, Drusus, Claudius was pushed by some quarters as a potential heir. This again suggests the political nature of his exclusion from public life. However, as this was also the period during which the power and terror of the commander of the Praetorian Guard, Sejanus, was at its peak, Claudius chose to downplay this possibility. After the death of Tiberius, the new emperor Caligula (the son of Claudius' brother Germanicus) recognized Claudius to be of some use. He appointed Claudius his co-consul in 37 to emphasize the memory of Caligula's deceased father Germanicus. Despite this, Caligula relentlessly tormented his uncle: playing practical jokes, charging him enormous sums of money, humiliating him before the Senate, and the like. According to Cassius Dio Claudius became very sickly and thin by the end of Caligula's reign, most likely due to stress. A possible surviving portrait of Claudius from this period may support this. 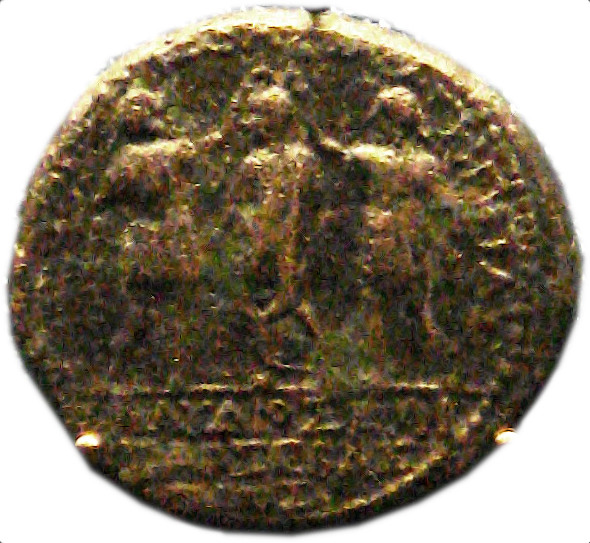 On 24 January 41, Caligula was assassinated in a broad-based conspiracy involving Cassius Chaerea – a military tribune in the Praetorian Guard – and several senators. There is no evidence that Claudius had a direct hand in the assassination, although it has been argued that he knew about the plot – particularly since he left the scene of the crime shortly before his nephew was murdered. However, after the deaths of Caligula's wife and daughter, it became apparent that Cassius intended to go beyond the terms of the conspiracy and wipe out the Imperial family.