Chulalongkorn University ( th, จุฬาลงกรณ์มหาวิทยาลัย, , ) (CU), nicknamed Chula ( th, จุฬาฯ), is a public and autonomous
research university A research university is a university A university ( la, universitas, 'a whole') is an educational institution, institution of higher education, higher (or Tertiary education, tertiary) education and research which awards academic degrees in va ...
in
Bangkok Bangkok is the capital and most populous city of Thailand. It is known in Thai language, Thai as Krung Thep Maha Nakhon or simply Krung Thep. The city occupies in the Chao Phraya River delta in central Thailand and has an estimated population of ...
,
Thailand ) , royal_anthem = '' Sansoen Phra Barami''( en, "Glorify His prestige") , image_map = , map_caption = , capital = Bangkok , coordinates = , largest_city = Bangkok , official_languages = Thai language, Thai ''* ...
. The university was originally founded during King
Chulalongkorn Chulalongkorn, also known as King Rama V, reigning title Phra Chula Chom Klao Chao Yu Hua) (Thai language, Thai: จุฬาลงกรณ์; Royal Thai General System of Transcription, RTGS: Chunlalongkorn ; 20 September 1853 – 23 October ...
's reign as a school for training royal pages and civil servants in 1899 (B.E. 2442) at the Grand Palace of Thailand. It was later established as a national university in 1917, making it the oldest institute of higher education in Thailand. During the reign of Chulalongkorn's son, King Vajiravudh, the Royal Pages School became the Civil Service College of King Chulalongkorn. The
Rockefeller Foundation '' The Rockefeller Foundation is an American private foundation based at 420 Fifth Avenue Fifth Avenue is a major thoroughfare in the borough (New York City), borough of Manhattan in New York City. It stretches north from Washington Square Pa ...
was instrumental in helping the college form its academic foundation. On 26 March 1917, King Vajiravudh renamed the college "Chulalongkorn University". Chulalongkorn University is a comprehensive and research-intensive university. It is ranked as the best university in Thailand in many surveys, quality of students, quality of research, quality in particular subjects, university reputation, environmental management systems. According to QS world university ranking 2017, CU is placed 245th in the world, 45th in Asia, 1st in Thailand, and 201–250 in the world graduate employability ranking. It is also ranked as Thailand's No. 1 university from various organizers such as Center for World University Rankings, Round university ranking,
Academic Ranking of World Universities 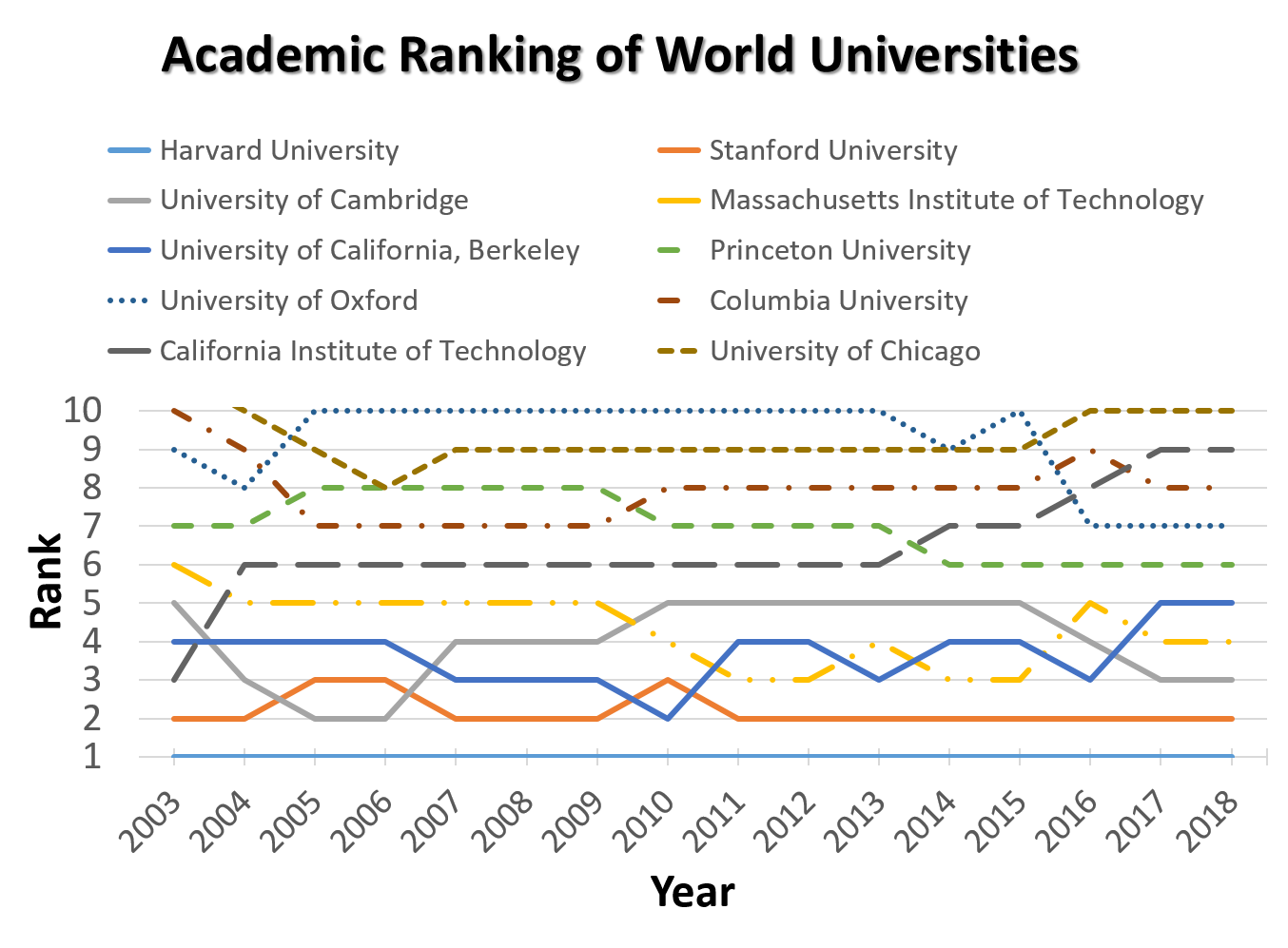 . Chulalongkorn University is one of the National Research Universities and supported by the Office of Nation Education Standards and Quality Assessment of Thailand. Moreover, CU is the only Thai university which is a member of Association of Pacific Rim Universities (APRU). Admission to CU is highly selective, and applicants are required to have high test scores. Applicants ranking in the top 10 national scores are chosen for study at CU.

CU is composed of nineteen faculties, a School of Agriculture, three colleges, ten institutes and two other schools. Its campus occupies a vast area in downtown
Bangkok Bangkok is the capital and most populous city of Thailand. It is known in Thai language, Thai as Krung Thep Maha Nakhon or simply Krung Thep. The city occupies in the Chao Phraya River delta in central Thailand and has an estimated population of ...
. Graduates customarily receive their diplomas from the King of Thailand, a tradition begun by King Prajadhipok (Rama VII).

King Chulalongkorn's reforms, aimed at transforming Thai society into a modern state demanded trained officials specialized in various fields. In 1899, the King founded the "Civil Service Training School" near the north gate of the
Royal Palace

. Those who graduated from the school would become royal pages. As royal pages, they learned how to manage organizations by working closely with the king, which was a traditional way to enter the Siamese bureaucracy. After serving as royal pages, they would then serve in the Mahattai Ministry or other government ministries. On 1 April 1902 the King renamed the school. It became the "Royal Pages School" ( th, โรงเรียนมหาดเล็ก). On 1 January 1911, King Vajiravudh changed the name to "Civil Service College of King Chulalongkorn" ( th, โรงเรียนข้าราชการพลเรือนของพระบาทสมเด็จพระจุลจอมเกล้าเจ้าอยู่หัว) as a memorial to his father and moved the school to
Windsor Palace

( th, วังวินด์เซอร์ หรือวังใหม่) in the Pathumwan District. The King subsidized the construction of a university campus and organized various schools around the city into Chulalongkorn. The college offered eight majors taught by five schools including; * School of International Relations in the Royal Palace * School of Teacher Training at Baan Somdet Chao Phraya * Royal Medical College at Siriraj Hospital * School of Legal Studies * School of Mechanical Sciences at Windsor Palace

King Rama VI realized that education should be provided not only to bureaucrats, but to all people. On 26 March 1917, the college was upgraded to "Chulalongkorn University" ( th, จุฬาลงกรณ์มหาวิทยาลัย), and the schools were transformed into four faculties: Faculty of Arts and Sciences, Faculty of Public Administration, Faculty of Engineering, and Faculty of Medicine. The
Rockefeller Foundation '' The Rockefeller Foundation is an American private foundation based at 420 Fifth Avenue Fifth Avenue is a major thoroughfare in the borough (New York City), borough of Manhattan in New York City. It stretches north from Washington Square Pa ...
reorganized the curriculum of the Faculty of Medicine. In 1923, the Faculty of Medicine became the first faculty to accept secondary school ( Mattayom) graduates. The remaining faculties then followed suit. After the Siamese Revolution of 1932, 1932 Revolution, the Khana Ratsadon, People's Party wanted legal and political studies to be independent of "royalists" so they moved the Faculty of Law and Political Science to the new Thammasat University in 1933. In 1938, Chulalongkorn University's Preparatory School was founded to provide pre-collegiate education to students. Those who managed to enter the university had to spend two years in the University-preparatory school, Preparatory School before going on to the Faculty of Arts and Sciences. The Preparatory School, however, ceased to be a university-owned preparatory school in 1947 and became the independent Triam Udom Suksa School. Later, the university established Chulalongkorn University Demonstration School (CUD) as a laboratory school for primary and secondary education for the Faculty of Education.

Since the establishment of the Royal Pages School, the former name of the university, King Chulalongkorn authorized the use of his personal emblem as a school emblem. The emblem is called ''Phra Kiao'', a Thai coronet, royal headgear for young princes and princesses. As the school was transformed into the university, the King authorized the use of ''phra kiao''. Today, ''phra kiao'' appears not only in formal letters and transcripts, but also on souvenirs made by the university as well as student uniforms.

Undergraduates are required to wear a uniform when studying, taking examinations, or contacting the university in person. Male graduate students wear a collared or polo shirt and dark trousers. Women wear a plain blouse with long skirt. Originally, the university uniform was adapted from a uniform worn by Chulalongkorn's heirs. The uniform was later updated, but the original is reserved as a formal uniform. The formal uniform is usually worn by student leaders and graduates. Today, the ordinary uniform for male undergraduate students consists of a plain white shirt with long or short sleeves and black (or dark blue) trousers. Wearing a dark blue necktie with colored ''phra kiao'' engraved on its front is mandatory for first-year students but optional for higher years. However, a black tie with a silver ''phra kiao'' pin is usually used by upperclass student in some faculties. Female students are required to wear a short-sleeved blouse with a fold along the spine. The buttons must be made of metal, and a small ''phra kiao'' emblem must be pinned on the right breast. A dark blue or black pleated skirt with any black, white, or brown shoes are worn. For female first-year students, white leather shoes are mandatory. Chulalongkorn University's uniforms have long been the template of many uniforms used in other universities in Thailand.

The academic dress of Chulalongkorn University is based on ceremonial attire called ''suea krui'', which is long-sleeved robe made of very fine mesh. Like dresses worn in Academic dress in the United Kingdom, the United Kingdom, the robe is open-fronted and calf-length. Square academic cap, Cap and hood, however, are omitted. A colored felt strip decorated with gold-colored ribbons is attached to the margin of the gown including elbow and wrist. Bachelors and masters students wear a black strip, while scarlet (color), scarlet and pink are for PhDs (including honorary degrees recipients) and lecturers. A yellow strip is specially used for the king of Thailand. In addition, the colored yarn (bachelor) or ribbon (master and doctor) is added to the center of the strip longitudinally, according to degree-granting faculty. The gown was authorized for use by Vajiravudh.

Albizia saman, Rain trees are common on the university campus. They are associated with the cycle of student life. Fresh green leaves at beginning of the term represent the freshmen's naivete. As the tree produces slimy pods and sheds leaves, the ground beneath it becomes slippery, thus alerting students to prepare for examinations. If they walk carefully, they will not slip (pass examinations). If they walk heedlessly, they will slip and fall (fail examinations). From 1937–1957, many rain trees were cut down to free space for new buildings. King Bhumibol Adulyadej noticed the dramatic decrease in the number of rain trees. On 15 January 1962, he brought five trees from Hua Hin and planted them in front of the university auditorium, proclaiming: "...I give these five trees as an eternal memorial." (). 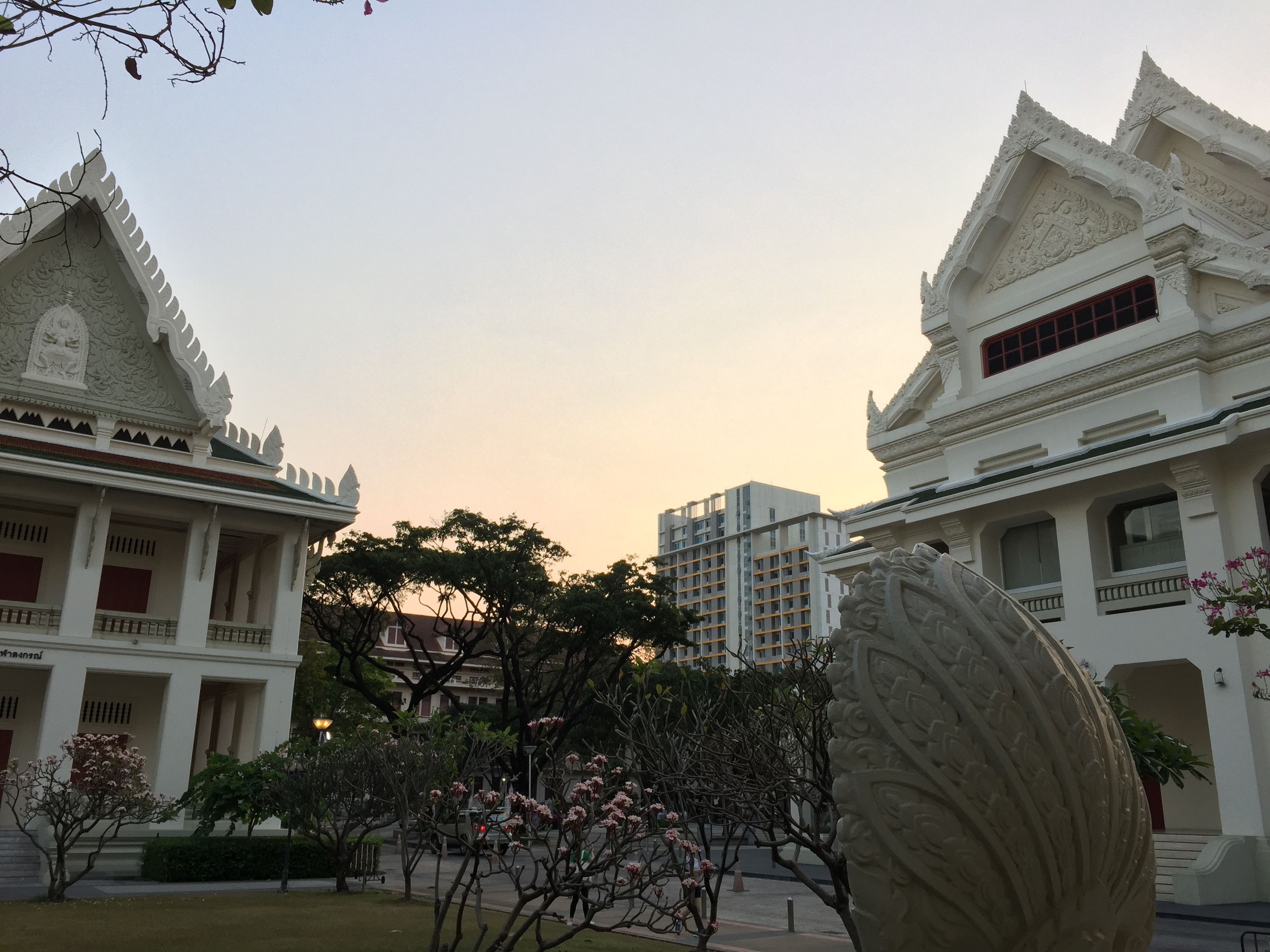 The west side of Chula's campus is the site of this innovative park. It has gradually sloping portions. Its 28 Rai (unit), rai expanse contains a water retention pond with a capacity of 3.8 million liters and a rain garden. Both help to ameliorate Bangkok's seasonal flooding. It was built to commemorate Chula's 100th anniversary in 2017.

The university is host to 40 student clubs, including the Buddhism and Traditions Club, the Religious Studies Club, the Mind Study Club, and the Thai Classical Music Club. Chulalongkorn also has a Morals Network, which actively campaigns to protect student activities from damaging the university's reputation. The university's Cheer Club annually organizes the Chula-Thammasat traditional football match.