Click Here for Items Related To - Canton of Grisons


The Grisons or Graubünden, more formally the Canton of the Grisons or the Canton of Graubünden (german: Kanton Graubünden; rm|Chantun Grischun; it|Cantone dei Grigioni), is one of the twenty-six cantons of Switzerland. It has eleven regions, and its capital is Chur. The German name of the canton, ''Graubünden'', translates as the "Grey Leagues", referring to the canton's origin in three local alliances, the Three Leagues. The other native names (''Grischun'' in Rumantsch Grischun and ''Grigioni'' in Italian) also refer to the Grey League. The Alpine ibex is the canton's heraldic symbol. The largest and easternmost canton of Switzerland, it is also one of the three large southern Alpine cantons, along with Valais and Ticino. It is the most diverse canton in term of natural and cultural geography, as it encompasses both sides of the Alps and several natural and cultural regions. The diversity of the canton is often compared to that of Switzerland and warrants it the name of "Little Switzerland". The Grisons is bordered by four cantons: Ticino to the south; Uri to the west; and Glarus and St. Gallen to the north. The canton is also bordered by Liechtenstein to the north; Austria's federated states of Vorarlberg and Tyrol to the north and east; and Italy's autonomous province of South Tyrol and region of Lombardy to the south. The Grisons is the only trilingual canton of Switzerland. It is also the only one where Romansh, Switzerland's fourth national language, has official status. Romansh language and culture is an important part of local identity. In the canton had a population of . It is the least densely populated canton of Switzerland. The only large city in the canton is Chur, with the majority of the population living in mountainous areas, including some of the highest valleys in Europe. The canton is a major tourist destination year-round, particularly for winter sports, and comprehends a large number of Alpine resort towns, notably Davos and St. Moritz. The canton is also renowned for its extensive narrow-gauge railway network, operated by the Rhaetian Railway. Formerly occupied by the Rhaeti, most of the lands of the canton became once part of a Roman province called Raetia, which was established in 15 BC, with ''Curia'', a settlement dating back to the Pfyn culture, as capital city. The area later became part of the lands of the diocese of Chur. The late middle ages saw the foundation of the League of God's House, the Grey League and the League of the Ten Jurisdictions. In 1471, an alliance give birth to the Three Leagues, and before the end of the 15th century, the latter became an ally of the Old Swiss Confederacy. In 1803, the Three Leagues finally became one of the cantons of the Confederation. 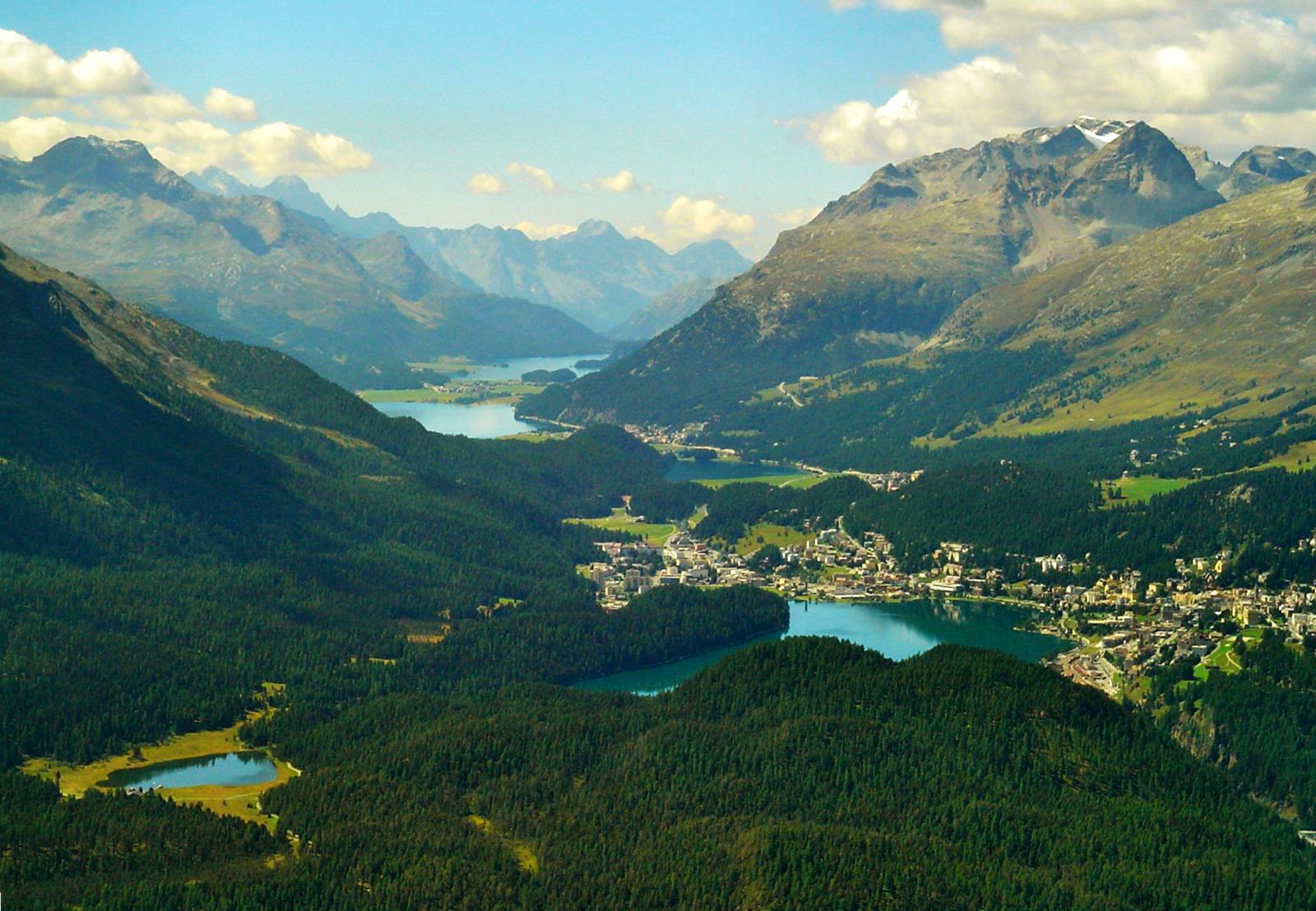 The Grisons is Switzerland's largest canton. It is also its easternmost canton. Its geography, essentially marked by the Alps, is complex and encompasses a wide range of climates and ecosystems. It is one of the three large southern Alpine cantons, along with Ticino and Valais, which comprehend regions on the south side of the Alps. But contrary to those (and all other cantons), it fully extends on both sides of the great Alpine barrier, from the northern plains at Maienfeld to the southern plains at Roveredo. However, a large portion of the canton is neither clearly north nor south of the Alps, it is the Engadin (the "garden of the Inn"), a large inner Alpine valley oriented towards eastern Europe. Therefore the canton comprehends four of the five drainage basins of the country. The north of the canton is drained by the Rhine (ending in the North Sea), the south by the Po and Adige through several affluents (Mediterranean Sea), and the Engadin by the Danube though the Inn (Black Sea). The Grisons lies fully within the Alps, with elevations above sea-level ranging from . It is both one the highest and lowest cantons, and the second-highest when considering mean elevation. As a consequence, its topography is extremely rugged and many of the highest settlements in the country (and Europe) are found there, notably in the Upper Engadin. The mountains are numerous and largely over 1,000 summits can be found in the canton. The highest is Piz Bernina, closely followed by numerous peaks in the homonymous range. Other prominent mountains are Piz Russein, Piz Kesch, Calanda, Aroser Rothorn and Rheinwaldhorn, see list of mountains of Graubünden for a more exhaustive list. The canton includes numerous other subranges of the Alps, notably the Bregaglia, the Glarus, the Gotthard, the Lepontine, the Plessur, the Oberhalbstein, the Albula, the Silvretta and the Rätikon ranges.

The deep Alpine valleys of the present-day Grisons were originally settled by the Raetians (''Rhaeti''). In Chur, archaeological evidence of settlement goes back as far as the Pfyn culture (3900-3500 BC), making the capital city of the Grisons one of the oldest settlements in Switzerland. Most of the lands of the canton were once part of a Roman province called ''Raetia'', which was established in 15 BC. The current capital of the Grisons, Chur, was known as Curia in Roman times. The area later was part of the lands of the diocese of Chur. In 1367 the League of God's House (''Cadi'', ''Gottes Haus'', ''Ca' di Dio'') was founded to resist the rising power of the Bishop of Chur. This was followed by the establishment of the Grey League (''Grauer Bund''), sometimes called ''Oberbund'', in 1395 in the Upper Rhine valley. The name ''Grey League'' is derived from the homespun grey clothes worn by the people and was used exclusively after 16 March 1424. The name of this league later gave its name to the canton of the Grisons. A third league was established in 1436 by the people of ten bailiwicks in the former Toggenburg countship, as the dynasty of Toggenburg had become extinct. The league was called League of the Ten Jurisdictions (''Zehngerichtebund'').

The first step towards the canton of the Grisons was when the league of the Ten Jurisdictions allied with the League of God's House in 1450. In 1471 the two leagues allied with the Grey League. In 1497 and 1498 the Leagues allied with the Old Swiss Confederacy after the Habsburgs acquired the possessions of the extinct Toggenburg dynasty in 1496, siding with the Confederacy in the Swabian War three years later. The Habsburgs were defeated at Calven Gorge and Dornach, helping the Swiss Confederation and the allied leagues of the canton of the Grisons to be recognised. However the Three Leagues remained a loose association until the ''Bundesbrief'' of 23 September 1524. The last traces of the Bishop of Chur's jurisdiction were abolished in 1526. The Musso war of 1520 drove the Three Leagues closer to the Swiss Confederacy. Between 1618 and 1639 it became a battleground between competing factions during the Bündner Wirren. The Protestant party was supported by France and Venice, while the Catholic party was supported by the Habsburgs in Spain and Austria. Each side sought to gain control of the Grisons to gain control over the important alpine passes. In 1618, the young radical Jörg Jenatsch became a member of the court of 'clerical overseers' and a leader of the anti-Habsburg faction. He supervised the torture to death of the arch-priest Nicola Rusca of Sondrio. In response, Giacomo Robustelli of the pro-Catholic Planta family, raised an army of rebels in the Valtellina. On the evening of 18/19 July 1620, a force of Valtellina rebels supported by Austrian and Italian troops marched into Tirano and began killing Protestants. When they finished in Tirano, they marched to Teglio, Sondrio and further down the valley killing every Protestant that they found. Between 500