Benigno Simeon "Ninoy" Aquino Jr., (November 27, 1932 – August 21, 1983) was a Filipino politician who served as a Senator of the Philippines (1967–1972) and governor of the province of Tarlac. He was the husband of Corazon Aquino—who, after his death, eventually became President of the Philippines—and father of a later President, Benigno Aquino III. Aquino, together with Gerardo Roxas and Jovito Salonga, helped form the leadership of the opposition towards then President Ferdinand Marcos. He was the aggressive leader who together with the intellectual leader Sen. Jose W. Diokno led the overall opposition. Shortly after the imposition of martial law, Aquino was arrested in 1972 along with others associated with the New People's Army's armed insurgency and incarcerated for seven years. He founded his own party, Lakas ng Bayan and ran in the 1978 Philippine parliamentary election, but all the party's candidates lost in the election. In 1980, he was permitted by Marcos to travel to the United States for medical treatment following a heart attack. During the early 1980s he became one of the most notable critics of the Marcos regime, and enjoyed popularity across the US due to the numerous rallies he attended at the time. As the situation in the Philippines worsened, Aquino decided to return to face Marcos and restore democracy in the country, despite numerous threats against it. He was assassinated at the Manila International Airport on August 21, 1983, upon returning from his self-imposed exile. His death revitalized opposition to Marcos; it also catapulted his widow, Corazon, into the political limelight and prompted her to successfully run for a six-year term as president as a member of the United Nationalist Democratic Organization (UNIDO) party in the 1986 snap election. Among other public structures, Manila International Airport has since been renamed Ninoy Aquino International Airport in his honor, and the anniversary of his death is a national holiday.

Benigno Simeón Aquino Jr. was born in Concepcion, Tarlac, on November 27, 1932, to Benigno Aquino Sr. and Aurora Lampa Aquino from a prosperous family of ''hacienderos'', the original owners of Hacienda Maling, Hacienda Sawang and Hacienda Murcia. His grandfather, Servillano Aquino, was a general in the revolutionary army of Emilio Aguinaldo, the officially recognized first President of the Philippines. He received his elementary education at the basic education department of De La Salle College and finished at the basic education department of Saint Joseph's College of Quezon City. He then graduated at the high school department of San Beda College. Aquino took his tertiary education at Ateneo de Manila University to obtain a Bachelor of Arts degree, but he interrupted his studies. According to one of his biographies, he considered himself to be an average student; his grade was not in the line of 90s nor did it fall into the 70s. At the age of 17, he was the youngest war correspondent to cover the Korean War for ''The Manila Times'' of ''Don'' Joaquín "Chino" Roces. Because of his journalistic feats, he received the Philippine Legion of Honor award from President Elpidio Quirino when aged 18. At 21, he became a close adviser to then Defense Secretary Ramon Magsaysay. Aquino took up law at the University of the Philippines Diliman, where he became a member of Upsilon Sigma Phi, the same fraternity as Ferdinand Marcos. He interrupted his studies again however to pursue a career in journalism. According to Máximo Soliven, Aquino "later 'explained' that he had decided to go to as many schools as possible, so that he could make as many new friends as possible." In early 1954, he was appointed by President Ramon Magsaysay, his wedding sponsor to his 1953 wedding at the Our Lady of Sorrows Church in Pasay with Corazon Cojuangco, to act as personal emissary to Luis Taruc, leader of the Hukbalahap rebel group. After four months of negotiations, he was credited for Taruc's unconditional surrender and was given a second Philippine Legion of Honor award with the degree of Commander on October 14, 1954. He became mayor of Concepcion in 1955 at the age of 23. 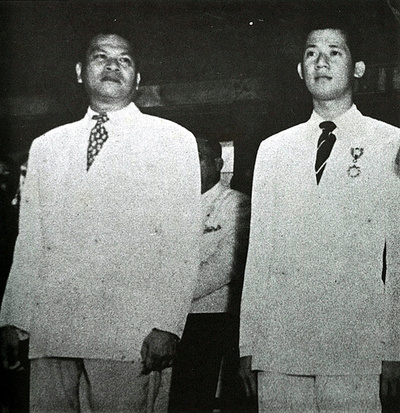 Aquino gained an early familiarity with Philippine politics, as he was born into one of the Philippines' political and landholding clans. His grandfather served under President Aguinaldo, and his father held office under Presidents Quezon and Jose P. Laurel. As a consequence, Aquino was able to be elected mayor when he was 23 years old. Five years later, he was elected the nation's youngest vice governor at 27 (the record was surpassed by Bongbong Marcos at 22 in 1980). Two years later, he became governor of Tarlac province in 1961 and then secretary-general of the Liberal Party in 1966. In 1968, during his first year as senator, Aquino alleged that Marcos was on the road to establishing "a garrison state" by "ballooning the armed forces budget," saddling the defense establishment with "overstaying generals" and "militarizing our civilian government offices." Aquino became known as a constant critic of the Marcos regime, as his flamboyant rhetoric had made him a darling of the media. His most polemical speech, "A Pantheon for Imelda", was delivered on February 10, 1969. He assailed the Cultural Center, the first project of First Lady Imelda Marcos as extravagant, and dubbed it "a monument to shame" and labelled its designer "a megalomaniac, with a penchant to captivate". By the end of the day, the country's broadsheets had blared that he labelled the President's wife, his cousin Paz's former ward, and a woman he had once courted, "the Philippines' Eva Peron". President Marcos is said to have been outraged and labelled Aquino "a congenital liar". The First Lady's friends angrily accused Aquino of being "ungallant". These so-called "fiscalization" tactics of Aquino quickly became his trademark in the Senate.