The Bantu languages (English: , Proto-Bantu: *bantʊ̀) are a large family of languages spoken by the Bantu peoples throughout sub-Saharan Africa. The total number of Bantu languages ranges in the hundreds, depending on the definition of "language" versus "dialect", and is estimated at between 440 and 680 distinct languages. For Bantuic, Linguasphere (Part 2, Transafrican phylosector, phylozone 99) has 260 outer languages (which are equivalent to languages, inner languages being dialects). McWhorter points out, using a comparison of 16 languages from Bangi-Moi, Bangi-Ntamba, Koyo-Mboshi, Likwala-Sangha, Ngondi-Ngiri and Northern Mozambiqean, mostly from Guthrie Zone C, that many varieties are mutually intelligible. The total number of Bantu speakers is in the hundreds of millions, estimated around 350 million in the mid-2010s (roughly 30% of the total population of Africa or roughly 5% of world population). Bantu languages are largely spoken southeast of Cameroon, throughout Central Africa, Southeast Africa and Southern Africa. About one-sixth of the Bantu speakers, and about one-third of Bantu languages, are found in the Democratic Republic of the Congo alone (c. 60 million speakers as of 2015). See list of Bantu peoples. The Bantu language with the largest total number of speakers is Swahili; however, the majority of its speakers use it as a second language (L1: c. 16 million, L2: 80 million, as of 2015). Other major Bantu languages include Zulu, with 12 million speakers ; Tiv with over 7 million speakers, mostly in Nigeria and some in Cameroon; and Shona with about 15 million speakers (if Manyika and Ndau are included). ''Ethnologue'' separates the largely mutually intelligible Kinyarwanda and Kirundi, which, if grouped together, have 20 million speakers.

The similarity among dispersed Bantu languages had been observed as early as the 17th century. The term ''Bantu'' as a name for the group was coined (as ''Bâ-ntu'') by Wilhelm Bleek in 1857 or 1858, and popularised in his ''Comparative Grammar'' of 1862. He coined the term to represent the word for 'people' in loosely reconstructed Proto-Bantu, from the plural noun class prefix ''*ba-'' categorizing 'people', and the root ''*ntʊ̀-'' 'some (entity), any' (e.g. Zulu ''umuntu'' 'person', ''abantu'' 'people'). There is no indigenous term for the group, as Bantu-speaking populations refer to themselves by their endonyms, but did not have a concept for the larger ethno-linguistic phylum. Bleek's coinage was inspired by the anthropological observation of groups frequently self-identifying as 'people' or 'the true people' (as is the case, for example, with the term ''Khoekhoe'', but this is a ''kare'' 'praise address' and not an ethnic name). The term ''narrow Bantu'', excluding those languages classified as Bantoid by Guthrie (1948), was introduced in the 1960s. The prefix ''ba-'' specifically refers to people. Endonymically, the term for cultural objects, including language, is formed with the ''ki-'' noun class (Nguni ''ísi-''), as in ''Kiswahili,'' 'coast language and culture,' and ''isiZulu,'' 'Zulu language and culture'. In the 1980s, South African linguists suggested referring to these languages as ''KiNtu.'' The word ''kintu'' exists in some places, but it means 'thing', with no relation to the concept of 'language'. In addition, delegates at the African Languages Association of Southern Africa conference in 1984 reported that, in some places, the term ''Kintu'' has a derogatory significance. This is because ''kintu'' refers to 'things' and is used as a dehumanizing term for people who have lost their dignity. In addition, ''Kintu'' is a figure in some mythologies. In the 1990s, the term ''Kintu'' was still occasionally used by South African linguists. But in contemporary decolonial South African linguistics, the term ''Ntu languages'' is used.

The Bantu languages descend from a common Proto-Bantu language, which is believed to have been spoken in what is now Cameroon in Central Africa. An estimated 2,500–3,000 years ago (1000 BC to 500 BC), speakers of the Proto-Bantu language began a series of migrations eastward and southward, carrying agriculture with them. This Bantu expansion came to dominate Sub-Saharan Africa east of Cameroon, an area where Bantu peoples now constitute nearly the entire population. Some other sources estimate the Bantu Expansion started closer to 3000 BC. The technical term Bantu, meaning "human beings" or simply "people", was first used by Wilhelm Bleek (1827–1875), as the concept is reflected in many of the languages of this group. A common characteristic of Bantu languages is that they use words such as ''muntu'' or ''mutu'' for "human being" or in simplistic terms "person", and the plural prefix for human nouns starting with ''mu-'' (class 1) in most languages is ''ba-'' (class 2), thus giving ''bantu'' for "people". Bleek, and later Carl Meinhof, pursued extensive studies comparing the grammatical structures of Bantu languages. 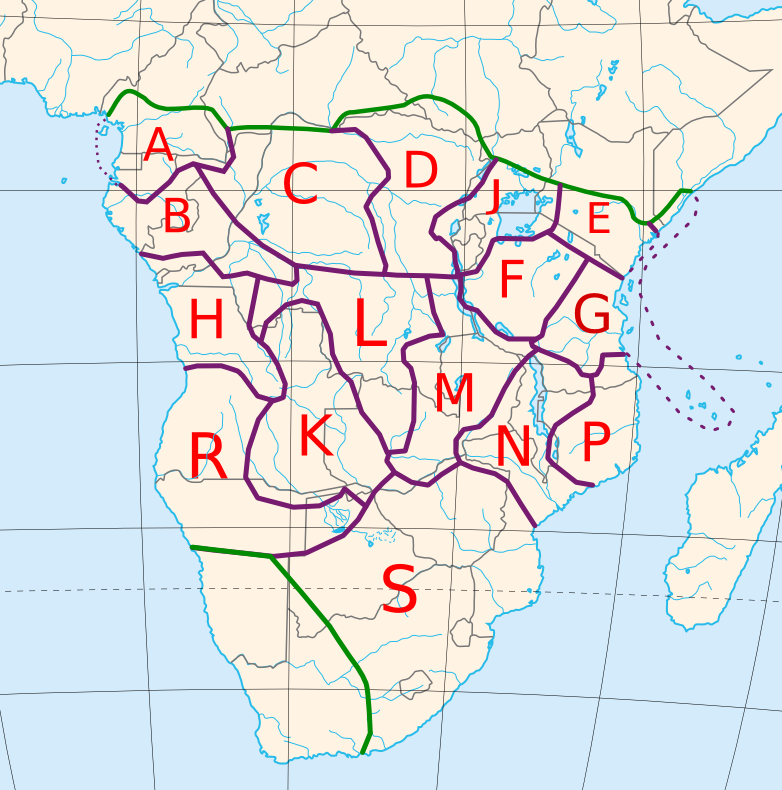 The most widely used classification is an alphanumeric coding system developed by Malcolm Guthrie in his 1948 classification of the Bantu languages. It is mainly geographic. The term 'narrow Bantu' was coined by the ''Benue–Congo Working Group'' to distinguish Bantu as recognized by Guthrie, from the Bantoid languages not recognized as Bantu by Guthrie. In recent times, the distinctiveness of Narrow Bantu as opposed to the other Southern Bantoid languages has been called into doubt (cf. Piron 1995, Williamson & Blench 2000, Blench 2011), but the term is still widely used. There is no true genealogical classification of the (Narrow) Bantu languages. Until recently most attempted classifications only considered languages that happen to fall within traditional Narrow Bantu, but there seems to be a continuum with the related languages of South Bantoid. At a broader level, the family is commonly split in two depending on the reflexes of proto-Bantu tone patterns: Many Bantuists group together parts of zones A through D (the extent depending on the author) as ''Northwest Bantu'' or ''Forest Bantu'', and the remainder as ''Central Bantu'' or ''Savanna Bantu''. The two groups have been described as having mirror-image tone systems: where Northwest Bantu has a high tone in a cognate, Central Bantu languages generally have a low tone, and vice versa. Northwest Bantu is more divergent internally than Central Bantu, and perhaps less conservative due to contact with non-Bantu Niger–Congo languages; Central Bantu is likely the innovative line cladistically. Northwest Bantu is clearly not a coherent family, but even for Central Bantu the evidence is lexical, with little evidence that it is a historically valid group. Another attempt at a detailed genetic classification to replace the Guthrie system is the 1999 "Tervuren" proposal of Bastin, Coupez, and Mann. However, it relies on lexicostatistics, which, because of its reliance on overall similarity rather than shared innovations, may predict spurious groups of conservative languages that are not closely related. Meanwhile, ''Ethnologue'' has added languages to the Guthrie classification which Guthrie overlooked, while removing the Mbam languages (much of zone A), and shifting some languages between groups (much of zones D and E to a new zone J, for example, and part of zone L to K, and part of M to F) in an apparent effort at a semi-genetic, or at least semi-areal, classification. This has been criticized for sowing confusion in one of the few unambiguous ways to distinguish Bantu languages. Nurse & Philippson (2006) evaluate many proposals for low-level groups of Bantu languages, but the result is not a complete portrayal of the family. ''Glottolog'' has incorporated many of these into their classification. The languages that share Dahl's law may also form a valid group, Northeast Bantu. The infobox at right lists these together with various low-level groups that are fairly uncontroversial, though they continue to be revised. The development of a rigorous genealogical classification of many branches of Niger–Congo, not just Bantu, is hampered by insufficient data. Computational phylogenetic analyses of Bantu include Currie et al. (2013), Grollemund et al. (2015), Rexova et al. 2006, Holden et al., 2016, and Whiteley et al. 2018.

Simplified phylogeny of northwestern branches of Bantu by Grollemund (2012):

Guthrie reconstructed both the phonemic inventory and the vocabulary of Proto-Bantu. The most prominent grammatical characteristic of Bantu languages is the extensive use of affixes (see Sotho grammar and Ganda noun classes for detailed discussions of these affixes). Each noun belongs to a class, and each language may have several numbered classes, somewhat like grammatical gender in European languages. The class is indicated by a prefix that is part of the noun, as well as agreement markers on verb and qualificative roots connected with the noun. Plural is indicated by a change of class, with a resulting change of prefix. All Bantu languages are agglutinative. The verb has a number of prefixes, though in the western languages these are often treated as independent words. In Swahili, for example, ''Kitoto kidogo kimekisoma'' (for comparison, ''Kamwana kadoko kariverenga'' in Shona language) means 'The small child has read it book. ''Kitoto'' 'child' governs the adjective prefix ''ki-'' (representing the diminutive form of the word) and the verb subject prefix ''a-''. Then comes perfect tense ''-me-'' and an object marker ''-ki-'' agreeing with implicit ''kitabu'' 'book' (from Arabic ''kitab''). Pluralizing to 'children' gives ''Vitoto vidogo vimekisoma'' (''Vana vadoko variverenga'' in Shona), and pluralizing to 'books' (''vitabu'') gives ''Watoto wadogo wamevisoma''. Bantu words are typically made up of open syllables of the type CV (consonant-vowel) with most languages having syllables exclusively of this type. The Bushong language recorded by Vansina, however, has final consonants, while slurring of the final syllable (though written) is reported as common among the Tonga of Malawi. The morphological shape of Bantu words is typically CV, VCV, CVCV, VCVCV, etc.; that is, any combination of CV (with possibly a V- syllable at the start). In other words, a strong claim for this language family is that almost all words end in a vowel, precisely because closed syllables (CVC) are not permissible in most of the documented languages, as far as is understood. This tendency to avoid consonant clusters in some positions is important when words are imported from English or other non-Bantu languages. An example from Chewa: the word "school", borrowed from English, and then transformed to fit the sound patterns of this language, is ''sukulu''. That is, ''sk-'' has been broken up by inserting an epenthetic ''-u-''; ''-u'' has also been added at the end of the word. Another example is ''buledi'' for "bread". Similar effects are seen in loanwords for other non-African CV languages like Japanese. However, a clustering of sounds at the beginning of a syllable can be readily observed in such languages as Shona, and the Makua languages. With few exceptions, notably Swahili, Bantu languages are tonal and have two to four register tones.

Reduplication is a common morphological phenomenon in Bantu languages and is usually used to indicate frequency or intensity of the action signalled by the (unreduplicated) verb stem. *Example: in Swahili ''piga'' means "strike", ''pigapiga'' means "strike repeatedly". Well-known words and names that have reduplication include: *Bafana Bafana, a football team *Chipolopolo, a football team *Eric Djemba-Djemba, a footballer *Lomana LuaLua, a footballer *Ngorongoro, a conservation area Repetition emphasizes the repeated word in the context that it is used. For instance, "Mwenda pole hajikwai," while, "Pole pole ndio mwendo," has two to emphasize the consistency of slowness of the pace. The meaning of the former in translation is, "He who goes slowly doesn't trip," and that of the latter is, "A slow but steady pace wins the race." Haraka haraka would mean hurrying just for the sake of hurrying, reckless hurry, as in "Njoo! Haraka haraka" ome here! Hurry, hurry In contrast, there are some words in some of the languages in which reduplication has the opposite meaning. It usually denotes short durations, and or lower intensity of the action and also means a few repetitions or a little bit more. *Example 1: In Xitsonga and (Chi)Shona, ''famba'' means "walk" while ''famba-famba'' means "walk around". *Example 2: in isiZulu and SiSwati ''hamba'' means "go", ''hambahamba'' means "go a little bit, but not much". *Example 3: in both of the above languages ''shaya'' means "strike", ''shayashaya'' means "strike a few more times lightly, but not heavy strikes and not too many times". *Example 4: In Shona ' means "scratch", ''Kwenyakwenya'' means "scratch excessively or a lot".

The following is a list of nominal classes in Bantu Languages: