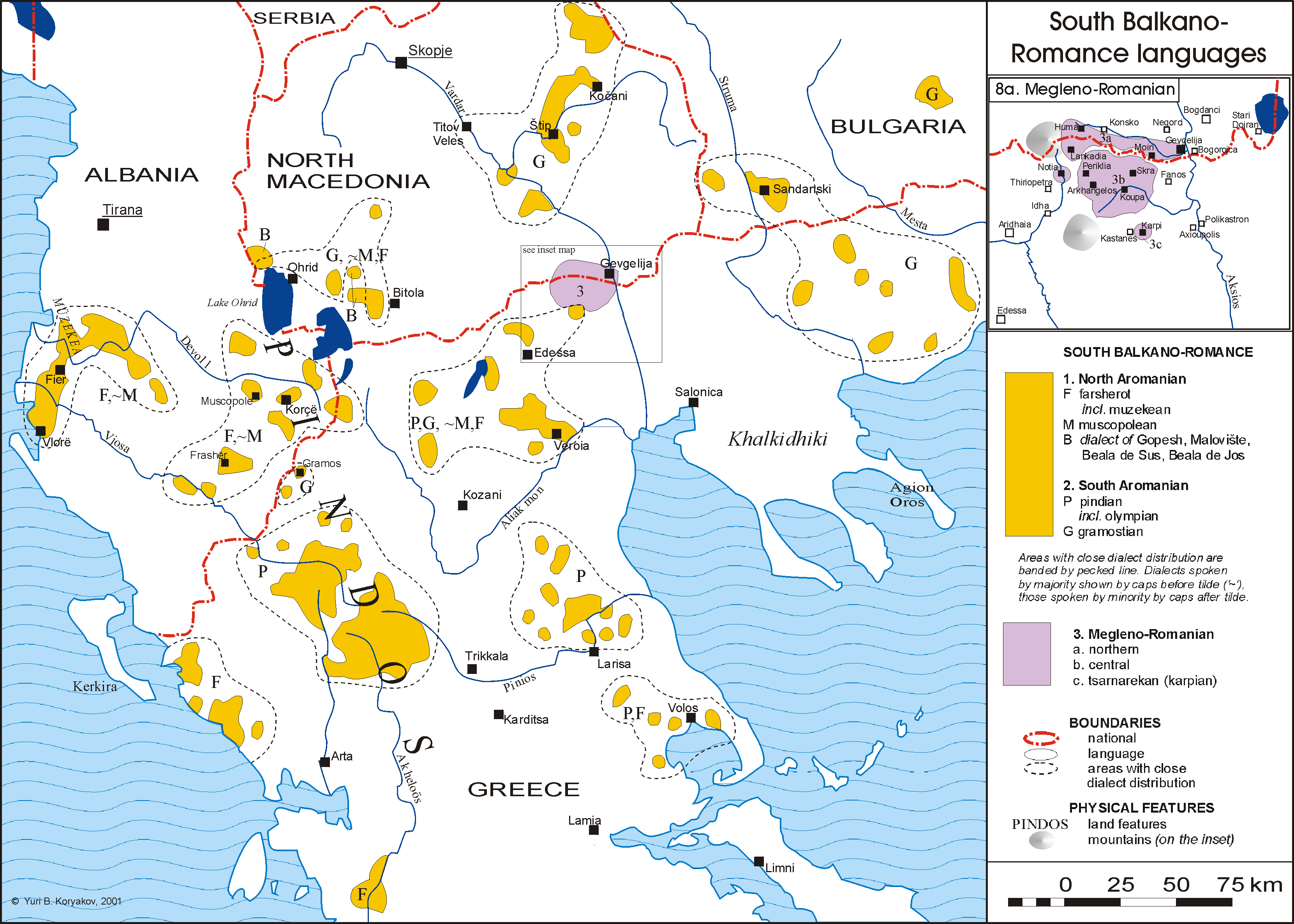 The preponderant number of Aromanian speakers is found in Greece, with substantial numbers of speakers also found in Albania, Bulgaria, Serbia, and North Macedonia. The latter was the only country where Aromanians are officially recognized as a national minority, until October 2017 when Albania also officially recognized them. Large Aromanian-speaking communities are also found in Romania, where some Aromanians migrated from Greece, Albania, Bulgaria and Serbia, mainly after 1925. Aromanians may have settled in Turkey due to the influence of the Ottoman Empire in the Balkans. Today, there are a few Aromanians living in Turkey.

Aromanian is similar to Romanian; its greatest difference lies in vocabulary. There are far fewer Slavic languages, Slavic words (mostly Bulgarian, Macedonian, and Serbian) in Aromanian than in Romanian, and many more Greek language, Greek words – a reflection of the close contact of Aromanian with Greek through much of its history. Loanwords of Greek origin were already present in Vulgar Latin, before the Roman Empire expanded into the Balkan region. Although there are fewer Slavic words in Aromanian, Aromanians are still surrounded by Slavic speakers in Bulgaria, North Macedonia, and Serbia, and Slavic loanwords are increasing. It is generally considered that sometime between 800 and 1,200 years ago, Vulgar Latin spoken in the Balkan provinces of the Roman Empire, which is also known as Eastern Romance languages, Proto-Eastern Romance, broke up into four languages: Romanian language, Romanian, Aromanian, Megleno-Romanian language, Megleno-Romanian and Istro-Romanian language, Istro-Romanian. A possibile origin for Aromanian is that in the same way standard Romanian is believed to be descended from the Latin spoken by the Getae (Dacians [''Daco-Thracians''] and Roman settlers in what is now Romania), Aromanian descended from the Latin spoken by Thracian and Illyrian peoples living in the southern Balkans (Epirus, Macedonia and Thrace). Greek influences are much stronger in Aromanian than in other Eastern Romance languages, especially because Aromanian has used Greek words to coin new words (neologisms), while Romanian has based most of its neologisms on French language, French. With the arrival of the Turkic peoples, Turks in the Balkans, Aromanian also received some Turkish language, Turkish words. Still, the lexical composition remains mainly Romance.

Aromanian is generally described as having three main dialects: Fãrshãrot, Gramustean and Pindean. It has also several regional variants, named after places that were home to significant populations of Aromanians (Vlachs); nowadays located in Albania, North Macedonia and Greece. Examples are the Moscopole variant (from the Metropolis of Moscopole, also known as the "Aromanian Jerusalem"); the Muzachiar variant from Muzachia in central Albania; the variant of Bitola; Pilister, Malovište ''( rup, Mulovishti)'', Gopeš ''( rup, Gopish)'', Upper Beala; Gorna Belica ''( rup, Beala di Suprã)'' near Struga, Krusevo ''( rup, Crushuva)'', and the variant east of the Vardar river in North Macedonia. An Aromanian dictionary currently under development can be found on :wikt:roa.rup, wiktionary.

Aromanian exhibits several differences from standard Romanian in its phonology, some of which are probably due to influence from Greek or Albanian. It has spirants that do not exist in Romanian, such as . Other differences are the sounds and , which correspond to Romanian and , and the sounds: , final , and , which exist only in local dialects in Romanian. Aromanian is usually written with a version of the Latin script with an orthography that resembles both that of Albanian language, Albanian (in the use of digraphs such as ''dh'', ''sh'', and ''th'') and Italian language, Italian (in its use of ''c'' and ''g''), along with the letter ''ã'', used for the sounds represented in Romanian by ''ă'' and ''â/î''. It can also be written with a modified Romanian alphabet that includes two additional letters, ''ń'' and ''ľ'', and rarely with a version of the Greek script.

* Central approximant consonants only occur as a result of a word-initial or intervocalic [] and [] when preceding another vowel. *//, // can have allophones as [], [] when preceding front vowels. *//, // are in free variation among different dialects. 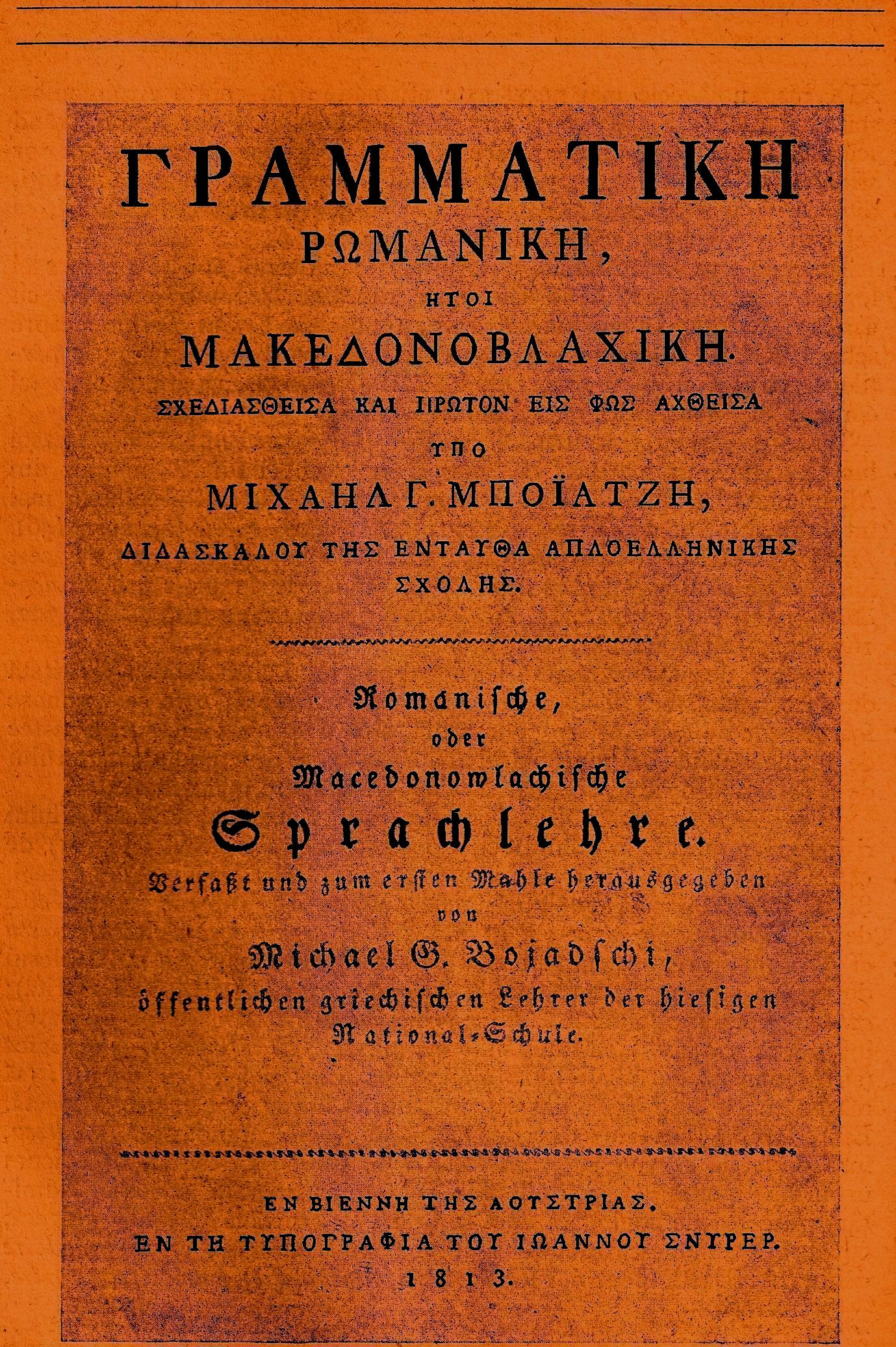 The grammar and morphology are very similar to those of other Romance languages: * It has two grammatical numbers: singular and plural (no Dual (grammatical number), dual). * It is a null-subject language. * Verbs have many grammatical conjugation, conjugations, including: ** A present tense, a preterite, an imperfect, a pluperfect and a future tense in the indicative mood, for statements of fact. ** An imperative mood, for direct commands. ** Three non-finite verb, non-finite forms: infinitive, gerund, and past participle. ** Distinct active and passive voices, as well as an impersonal passive voice. The Aromanian language has some exceptions from the Romance languages, some of which are shared with Romanian language, Romanian: the definite article is a clitic particle appended at the end of the word, both the definite and indefinite articles can be declension, inflected, and nouns are classified in three grammatical gender, genders, with neuter in addition to masculine and feminine.

Aromanian grammar has features that distinguish it from Romanian, an important one being the complete disappearance of verb infinitives, a feature of the Balkan sprachbund. As such, the tenses and moods that, in Romanian, use the infinitive (like the Future tense, future simple tense and the conditional mood) are formed in other ways in Aromanian. For the same reason, verb entries in dictionaries are given in their indicative mood, present tense, first-person-singular form. Aromanian verbs are classified in four conjugations. The table below gives some examples and indicates the conjugation of the corresponding verbs in Romanian.

The future tense is formed using an auxiliary invariable particle "u" or "va" and the subjunctive mood.

Whereas in Romanian the pluperfect (past perfect) is formed synthetically (as in literary Portuguese language, Portuguese), Aromanian uses a periphrastic construction with the auxiliary verb ''am'' (have) as the imperfect (''aviam'') and the past participle, as in Spanish language, Spanish and French language, French, except that French replaces ''avoir'' (have) with ''être'' (be) for some intransitive verbs. Aromanian shares this feature with Megleno-Romanian language, Meglenian as well as other languages in the Balkan language area. Only the auxiliary verb inflects according to number and person (''aviam'', ''aviai'', ''avia'', ''aviamu'', ''aviatu'', ''avia''), whereas the past participle does not change. 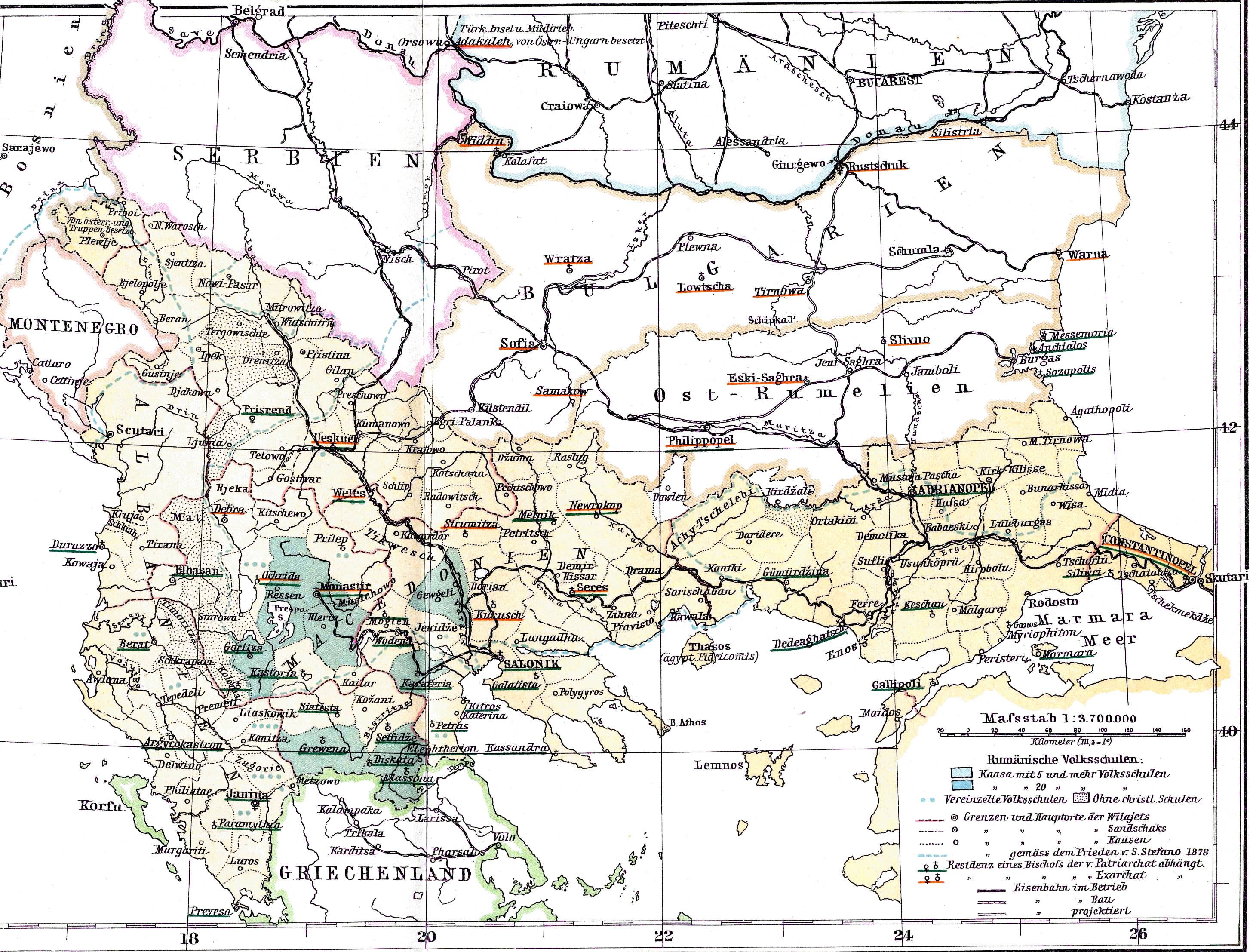 Even before the incorporation of various Aromanian-speaking territories into the Greek state (1832, 1912), the language was subordinated to Greek language, Greek, traditionally the language of education and religion in Constantinople and other prosperous urban cities. The historical studies cited below (mostly Theodor Capidan, Capidan) show that especially after the fall of Moscopole (1788) the process of Hellenisation via education and religion gained a strong impetus mostly among people doing business in the cities. The Romanian state began opening schools for the Romanian-influenced Vlachs in the 1860s, but this initiative was regarded with suspicion by the Greeks, who thought that Romania was trying to assimilate them. 19th-century travellers in the Balkans such as W. M. Leake and Henry Fanshawe Tozer noted that Vlachs in the Pindus and Macedonia were bilingual, reserving the Latin dialect for inside the home. By 1948, the new Soviet-imposed Communist Romania, communist regime of Romania had closed all Romanian-run schools outside Romania and, since the closure, there has been no formal education in Aromanian and speakers have been encouraged to learn and use the Greek language. This has been a process encouraged by the community itself and is not an explicit State policy. The decline and isolation of the Romanian orientated groups was not helped by the fact that they openly collaborated with the Axis powers of Italy and Germany during the occupation of Greece in WWII. Notably, the vast majority of Vlachs fought in the Greek resistance and a number of their villages were destroyed by the Germans. The issue of Aromanian-language education is a sensitive one, partly because of opposition within the Greek Vlachs community to actions leading to the introduction of the language into the education system, viewing it as an artificial distinction between them and other Greeks. For example, the former education minister, George Andreas Papandreou, George Papandreou, received a negative response from Greek-Aromanian mayors and associations to his proposal for a trial Aromanian language education programme. The Panhellenic Federation of Cultural Associations of Vlachs expressed strong opposition to EU's recommendation in 1997 that the tuition of Aromanian be supported so as to avoid its extinction. On a visit to Metsovo, Epirus (region), Epirus in 1998, Greek President Konstantinos Stephanopoulos called on Vlachs to speak and teach their language, but its decline continues. A recent example of the sensitivity of the issue was the 2001 conviction (later overturned in the Appeals Court) to 15 months in jail of Sotiris Bletsas, a Greek Aromanian who was found guilty of "dissemination of false information" after he distributed informative material on minority languages in Europe (which included information on minority languages of Greece), produced by the ''European Bureau for Lesser Used Languages'' and financed by the European Commission. His conviction met with broad condemnation in Greece, where at least editorial compared the situation to the suppression of Kurdish and other minority languages in Turkey and noted the irony that some prosecutors in fact came from non-Hellenophone families that had once spoken Aromanian or Turkish. Bletsas was eventually acquitted.

The following text is given for comparison in Aromanian and in Romanian language, Romanian, with an English translation. The spelling of Aromanian is that decided at the Bitola Symposium of August 1997. The word choice in the Romanian version was such that it matches the Aromanian text, although in modern Romanian other words might have been more appropriate. The English translation is only provided as a guide to the meaning, with an attempt to keep the word order as close to the original as possible.