Aquilino Quilinging Pimentel Jr. (December 11, 1933 – October 20, 2019), commonly known as Nene Pimentel, was a Filipino politician and human rights lawyer who was one of the leading political opposition leaders during the regime of Ferdinand Marcos from the declaration of martial law in 1972 until the People Power Revolution in 1986, which removed Marcos from power. He co-founded the country's current ruling party Partido Demokratiko Pilipino–Lakas ng Bayan (PDP–Laban) and served as the President of the Senate of the Philippines from 2000–2001. He was the father of incumbent senator and former Senate President Aquilino Pimentel III.

Delegate to the 1971 Constitutional Convention

In April 1978, Pimentel ran for a post in the Interim Batasan elections as an official candidate of the Laban party of Metro Manila with Benigno S. Aquino Jr.. Members of Marcos' KBL party swept the seats. Pimentel and other opposition leaders like Senator Lorenzo Tañada, Francisco Soc Rodrigo, Tito Guingona, Archie Intengan SJ, and Chino Roces loudly protested the defeat of all opposition candidates and denounced the massive cheating that had taken place. Pimentel was one of those arrested for leading a demonstration against what he termed farcical elections. He had spoken out against Marcos' bid to produce a rubber stamp legislature to win legitimacy for his iron-fisted regime which was increasingly being criticized here and abroad. Pimentel was jailed for two months in Camp Bicutan, Metro Manila. Pimentel's second stint in prison did not silence him. In fact, it strengthened his resolve to fight for freedom and to oppose electoral fraud. Ever the parliamentarian, he brought the battle from the streets to the polls in January 1980 when Marcos allowed local elections.

His wife Bing recalled they launched his mayoralty bid in Cagayan de Oro with a mere P2,000 in his war chest – all the money the couple could muster. But Cagayanons who believed in him contributed to his campaign and penned his name on their ballot. Pimentel won by a 3-1 margin over his KBL rival, who was fielded by Marcos. Pimentel ran under the coalition banner of the National Union for Democracy and Freedom and the Mindanao Alliance which busted KBL dominance in Misamis Oriental. He and his entire slate of candidates for vice mayor and seven city councilors swept the elections in Cagayan de Oro. His candidates for governor and vice governor also won. Pimentel was not to govern his city unhindered. In 1981, while he was on a five-week training course in the United States, the Comelec ousted him for "political turncoatism", installing the KBL candidate as mayor. The Comelec cited Pimentel for switching from Laban in April 1978 to the Narional Union for Democracy and Freedom in December 1979 and then running as candidate of the Mindanao Alliance in January 1980. The Comelec's move ired the Cagayanons. Pimentel partisans immediately staged peaceful demonstrations to express their displeasure. About 30 of his supporters also started fasting in protest. Six days later, 10,000 of his supporters marched around the city in a nonviolent show of support for Pimentel who was then on an official trip to the US. Thousands more lined the streets to cheer them on. This first-ever demonstration of "People Power" came at a time when Marcos did not lightly tolerate dissent. Meanwhile, in Manila, Pimentel's lawyer, headed by opposition leaders former Senators Lorenzo Tañada and Soc Rodrigo, along with Abraham Sarmiento, Raul Gonzales and Joker Arroyo, claimed that the Comelec had acted without jurisdiction and contented that the electorate's will should be respected. The Comelec, however, reaffirmed its decision to oust Pimentel. The conflict made national headlines and photos of demonstrations in Cagayan de Oro appeared in a major daily. To defuse the escalating turmoil, Marcos engineered a truce and reinstalled Pimentel as mayor, pending a Supreme Council decision. Pimentel arrived from the US in time to pick up the reins of city government that had briefly been wrested from him. In 1983, while he was in Cebu City, Pimentel was arrested on charges of rebellion and was detained. He had allegedly given P100 to new People's Army commander. Bing Pimentel recalled it was horrible time as the family did not know where he was. They traced him to Camp Sergio Osmeña and later to Camp Cabahug in the City of Cebu. Even as he was held in the military detention centers, his followers from Cagayan De Oro and other parts of the country visited him by the hundreds to boost his morale and keep his spirits high. Nene Pimentel disputed the charges and was later released. Returning home, he was mobbed by thousand of his supporters upon his arrival at the pier of Cagayan de Oro. Later, he was again arrested for allegedly engaging in ambuscades. His supporters contributed centavos and pesos in small denomination to bail him out. Subsequently, Pimentel was placed under house arrest which lasted for almost seven months.

From the confines of his home, Pimentel continued to keep abreast of national news. He helped rally the opposition, ran the city and launched his bid as assemblyman for the Batasang Pambansa. He was, if anything, not quiet. He protested relentlessly and fearlessly against injustice, fraud, corruption and Marcos' dictatorial rule. Then, in the aftermath of the assassination of Marcos's chief rival, Benigno "Ninoy" Aquino Jr. in 1983, Pimentel won a seat in the Batasang Pambansa elections of 1984. But the Marcos government ousted him on the allegation that he had cheated in the elections. The Supreme Court itself recounted the ballots in an electoral contest. The feisty Pimentel, a relentless critic of the Marcos regime, was often seen with Ninoy's widow, Cory, as they rallied the opposition. At one point, Cory asked him to be her running mate in the 1986 Snap Elections and he agreed. However, at the 11th hour, when Cardinal Jaime Sin brokered a political marriage between Cory and Salvador "Doy" Laurel Jr., Pimentel graciously stepped aside and let history run its course. The widow toppled the dictator who fled the country. Upon her ascent to power President Aquino appointed Pimentel as Minister of Local Government. He had the unenviable task of dismantling the structure of dictatorship and corruption left behind by the Marcos regime. Pimentel wielded the axe deliberately, gaining a breathing space for the new administration. His critics alleged he had sold positions in the new government, but none could make the charge stick. Pimentel incurred the ire of some but also the respect of those who saw that he did it without fear or favor or taint of corruption.

He then was elected Senator (1987–1992), authoring the seminal Local Government Code. As Senator, he authored and sponsored several key pieces of legislation, among them the Local Government Code of 1991, the Cooperative Code, the Philippine Sports Commission Act, the Act Creating the Autonomous Region in Muslim Mindanao, and the People's Small-Scale Mining Act. He also authored and co-sponsored the Generic Drugs Act and the Act Establishing the Philippine Police under a Reorganized Department of Interior and Local Government. On September 16, 1991, Nene Pimentel was among the "Magnificent 12" senators who voted against the extension of the PH-US Bases Treaty.

He then launched a bid for the vice presidency in 1992, running under the Liberal Party-PDP–Laban Coalition with Jovito Salonga running for president, finishing fifth among the vice presidential candidates by garnering 9.9% of the vote. He was defeated in the 1995 national elections after running for another term for the Senate placing on number 15. He then took the case to the Supreme Court eventually winning the suit in 2004.

In 1998, he ran successfully for another term in the Senate of the Philippines, from 1998-2004. Along with Edgardo Angara and Juan Ponce Enrile, Pimentel is one of the three senators elected in 1987 to return to the Senate. He was re-elected in the May 10, 2004 National Elections attaining the third highest number of votes nationally of nearly 80 candidates for 12 Senate seats.

In October 2000 Senate President Franklin Drilon issued a statement about the ''Juetengate scandal'' of President Joseph Estrada. Drilon was removed as Senate President the next month through a Senate revamp and Pimentel was installed as Senate President. In December 2000, an impeachment case was filed on the Senate. On January 16, 2001, Pimentel was one of those who voted in favor of the opening of the second bank envelope. Their vote was outnumbered and some of the opposition senators cried in front of Senate President Pimentel. Joseph Estrada was ousted in January by the second EDSA People Power Revolution, but he was pardoned by his successor, Gloria Macapagal-Arroyo on October 26, 2007. Pimentel occupied the Senate presidency until the end of the regular session in June 2001. As he explained his vote to open he declared: Before stepping down as senator, Pimentel made a final privilege speech, where he demanded the American government and the Field Museum of Natural History in Chicago to return to the Philippines the Golden Tara, one of the most significant artifacts in the entire country which landed in American possession during the financial crisis in the Philippines. 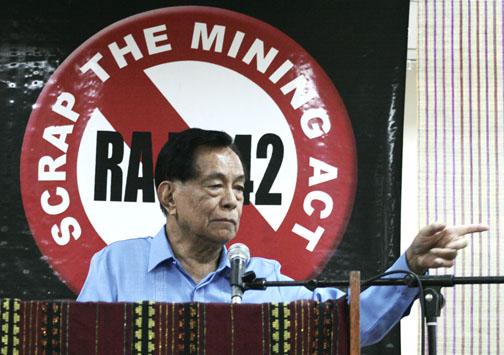 As chair of the Blue Ribbon Committee, he has recommended the prosecution of top government officials of previous administrations in relation to the Expo Pilipino centennial scam and the misuse of the funds of the Retirement and Separation Benefits Systems of the Armed Forces. He has also recommended the prosecution of certain personnel of the Land Registration Administration for involvement in faking of land titles. Recently his committee also conducted series of investigations into the allegation of Governor Luis "Chavit" Singson on jueteng scandal. As Chair of the Committee on Local Government, he has supported far-reaching amendments to further strengthen the role of local government units in national development. He has also gotten senate approval to return the police to the supervision of LGUs and has authored a law to fix the date for elections of ARMM officials. He is the president and founder of the PDP–Laban party. On April 25, 2008, Senator Pimentel authored a bill that would shift the Philippines into a Federal Republic of the Philippines.

Nene Pimentel left office on June 30, 2010 after serving three Senate terms and briefly as Senate President. He remained active in political life, taking on the role of elder statesman - continuing to criticise authoritarianism, human rights violations, and the Marcoses. Nene Pimentel was a proponent of federalism in the Philippines. He has proposed 5 states in Luzon (North Luzon, Cordillera, Central Luzon, Southern Tagalog, and Bicol), 1 federal capital (Metro Manila), 4 states in Visayas (East Visayas, Central Visayas, Western Visayas, and Minparom), and 3-4 states in Mindanao (Bangsamoro, Southern Mindanao, and Northern Mindanao - which may be divided into Northeast Mindanao and Northwest Mindanao). He also proposed the establishment of two autonomous regions within the proposed Bangsamoro federal state, as the Muslims of the Sulu archipelago do not want to be lumped with the Muslims of mainland Mindanao due to their distinct culture.

His son Aquilino III ran for Senator in 2007 but cheated by a fellow Mindanaoan Juan Miguel Zubiri due to an electoral fraud in Maguindanao. In 2010, his daughter Gwen made a senatorial race attempt under the Nacionalista Party coalition and a member of the PDP–Laban but lost. The following year Koko Pimentel was proclaimed senator after Zubiri resigned from the Senate. He got his full term in 2013 under Team PNoy. He would become Senate President in 2016. Nene supported President Rodrigo Duterte during the election campaign.

On October 14, 2019, Pimentel was admitted to the intensive care unit of an undisclosed hospital in Metro Manila. His daughter, Gwendolyn, reported that he was experiencing difficulty in breathing due to pneumonia. A family statement described that Pimentel was "very ill". On October 20, Senator Koko Pimentel announced that his father had died at around 5 a.m. (PST) due to complications from lymphoma. He was 85 and two months away from his 86th birthday Pimentel's remains were laid to rest at The Heritage Park in Taguig, Metro Manila.


Senate of the Philippines